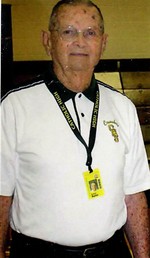 Robert Michael Burke, age 98, passed away in his home surrounded by family on March 29, 2021. He was a lifelong resident of Pensacola, FL. He was known by many as Coach Burke and “The Godfather of Catholic High.”

Robert was a graduate of St. Michael High School in 1941. In the fall of that same year, he began his teaching and coaching career when the newly formed Pensacola Catholic High School opened its doors. He taught and coached at Catholic High for over 75 years.

From 1941 to the early 1980s, he served the community working on a milk truck from the early morning to the afternoon. He would then go to work at Catholic High, teaching and coaching basketball.


His passion and love for his players and the game inspired countless players over the years. This was best illustrated by his motto and number one rule — “Do your best and leave the rest to God.”


In the early 1980s, he began full time teaching, inspiring generations of Catholic High students with his commitment to what would become the Core Values of Catholic High (Selfless Love, Commitment to Excellence, Personal Integrity, and Commitment to Service). Coach Burke was the finest example of living these core values to the fullest and he made an unforgettable impression for all who knew him.


His greatest commitment was his selflessness to his family, who simply knew him as Bob or Uncle Robert. Although he never married or had children of his own, he was the true definition of the family patriarch. At the early age of 18, he became the head of the household and maintained the family home for his widowed mother and widowed sister.
Whether it was his quick wit, subtle humor, charisma and charm, he always made those around him feel better. His family, loved ones, and the Catholic High community will surely miss his shining example of Love of God, family, country and neighbor that he would espouse with his trademark gravelly voice.


A grateful alumnus of Catholic High established the Robert Burke Charisma Fund many years ago which ensures that deserving students are able to attend Coach Burke’s alma mater. Catholic High has also dedicated the greenhouse in his name as well as placing a statue of St. Therese, the patron saint of Little Flower parish at the school. The statue has an engraved plaque which says, “In honor of Coach Robert Burke class of 1941, Coach, Teacher, and Ultimate Crusader."

The family will be accepting visitors Wednesday, April 7th from 5-7 PM at Waters and Hibbert Funeral Home. The Rosary will be prayed at 6:30 PM. Burial Mass will be held on Thursday, April 8th 11 AM at Little Flower Catholic Church, 6495 Lillian Hwy, Pensacola, FL 32506 with Father Matt Worthen serving as the main celebrant. There will also be a Live Stream of the service at https://www.hdezwebcast.com/show/robert-michael-burke

The family would like to offer our sincere thanks and gratitude to Dr. Grace Torres-Hodges, Dr. Steven Lenga, Dr. Henry Langhorne III and all of the other amazing medical providers who provided such exceptional care to Coach Burke.