To share your memory on the wall of Maria Fivgas, sign in using one of the following options:

To send flowers to the family or plant a tree in memory of Maria Paleologou Fivgas, please visit our Heartfelt Sympathies Store.

We encourage you to share your most beloved memories of Maria here, so that the family and other loved ones can always see it. You can upload cherished photographs, or share your favorite stories, and can even comment on those shared by others.

Posted Oct 02, 2019 at 12:00am
Dear Panayota, We are very sorry for your loss. Thea Maria was loved by all of my family and we offer our prayers and condolences during this difficult time. May her memory remain eternal along with Theo Vick, George , and Evie. I wish we could have made it to the funeral but traveling with mom is difficult.Love, George, Mary, Katherine, Sophia, and Thea Maria Fivgas ~ George Fivgas, Baton Rouge, Louisiana
Comment Share
Share via:
SS

Posted Sep 28, 2019 at 12:00am
We are so sorry that we could not make the service. May her memory be eternal and may God be with you and your family during your mourning period. We are so sorry and sad for her loss. She will be missed dearly. ~ Suzee Emily & Crystal Shoulders, Navarre, Florida
Comment Share
Share via:
CR

Posted Sep 28, 2019 at 12:00am
Panayiota, we are so sorry for your loss. Prayers for comfort for you and your family. ~ Cheryl Rich, Kerrville, Texas
Comment Share
Share via:
EW

Posted Sep 27, 2019 at 12:00am
One of the sweetest ladies Iever known. She will be missed. May her memory be eternal. Betsy and Randy Werre ~ Elizabeth Werre, PENSACOLA, Florida
Comment Share
Share via:
MM

Posted Sep 26, 2019 at 12:00am
My sincere thoughts and prayers to all of Thea Mapias Family. I have wonderful memories growing up in the Montgomery Greek Orthodox Church Community with Evie, George, and, John. Panayiota, May you be comforted with love and peace from Jesus Our Saviour. Love, Maria Mitchell ~ Maria Mitchell, Houston
Comment Share
Share via: 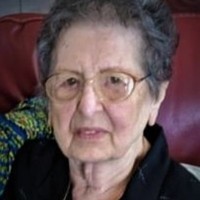