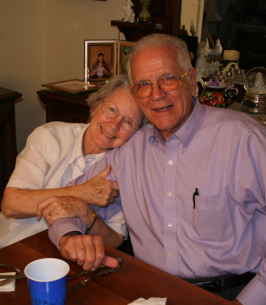 Harold graduated from Henry Clay High School in Lexington, class of 1951, where he excelled in vocal music and debate. He then attended Freed-Hardeman College in Henderson, TN, to work on a two-year degree in Bible. Soon after arriving at Freed-Hardeman, he met the love of his life, Mona McLeod, of Lucedale, Mississippi. They were married in the Rocky Creek Church of Christ on December 19, 1952, and moved to Jackson, MS. While in Jackson they gave birth to their first child, Stephen. Harold wished to continue his studies and they moved to Lueders, Knox City, and then Slaton, towns in west Texas. Harold worked as a full-time preacher and continued his Biblical studies at Abilene Christian College and Texas Tech University, Lubbock, TX. Tamara and Twayne were born during this time.

In 1961, Harold and Mona decided to go to Florence, Italy, to work as ‘protestant’ missionaries in a Catholic country. They traveled to Italy and spent the next ten years learning the language and culture, growing in their love for the Italian people, and teaching the good news of Jesus. Timothy, their youngest child, was born while in Florence. In 1971, they decided to move the family to Montreal, Canada, where he worked as the minister for the Lachine Church of Christ. He also worked within the large Italian community in Montreal and began an Italian speaking congregation. After four years, the family moved to Wichita Falls, TX, to work with the 10th and Broad Church of Christ. In 1979 they moved to Channelview (greater Houston area), TX, where Harold and Mona worked with the Channelview Church of Christ for ten years. They finally moved to Pensacola, FL, where Harold worked with the Gateway Church of Christ as one of their ministers. In 2000, Harold finally retired from formal church ministry and began a second career as a realtor. Harold thoroughly enjoyed working with other realtors, but especially enjoyed getting to know people and helping them find homes.

Always glad to visit over one of Mona’s delicious Italian meals and an espresso, Harold and Mona shared their home and time with countless friends, and never stopped demonstrating the love of Christ with Joyful Hospitality. Harold was involved in numerous civic organizations over the years, but his heartfelt duty was fulfilled in telling of Jesus and his love and encouraging Christian brothers and sisters to love God and become Christlike in their daily walk. He spoke of God’s truth to groups of listeners in over thirty countries, served as a full-time minister for many congregations, and as an elder for several congregations. Even in his 80s he continued to teach Bible classes and occasionally preach for the Warrington Church of Christ, passing on what he had learned through a lifetime of Bible study.

A Service of Remembrance will be held at 2pm, Saturday, July 30, 2022, at the Warrington Church of Christ, 403 N Navy Blvd, Pensacola. Those who wish to remember Harold in a special way may make a gift in his memory to the World Bible School (www.worldbibleschool.net), or to St. Jude’s Children’s Research Hospital found at (https://www.stjude.org/donate/srch/st-jude-donation.html) or (800) 608-3023.