To share your memory on the wall of Harold Marcus, sign in using one of the following options:

In 1957, he married his wife, Patricia Hymans Marcus. They were married for 54 years, until her death in 2012. They moved to Pensacola and worked in the linen supply and industrial uniform industry for many years before taking a job in the Lewis Bear Company, founded by his mother’s family in Pensacola in 1876. Some of Hal’s many passions in life were antique automobiles, traveling, and playing bridge. Hal spent his later years very active in the Azalea Trace community, serving as bingo director, and acting in plays, among other activities.

Services will be 2:00 p.m. Wednesday May 19, 2021 at Waters & Hibbert Funeral Home with Rabbi Joel Fleekop officiating. There will be a live stream of the funeral services https://www.hdezwebcast.com/show/harold-edward-marcus-jr. Interment will follow to Beth-El Cemetery.

In lieu of flowers, the family asks that donations be made to Temple Beth-El, to The Cancer Society, or the Veterans Charity of your choice.

To send flowers to the family or plant a tree in memory of Harold Edward Marcus Jr., please visit our Heartfelt Sympathies Store.

We encourage you to share your most beloved memories of Harold here, so that the family and other loved ones can always see it. You can upload cherished photographs, or share your favorite stories, and can even comment on those shared by others.

Guaranteed hand delivery by a local florist
A

Posted May 19, 2021 at 01:10pm
Please accept our heartfelt condolences. Hal was a true gentleman and he will be greatly missed by all who had the honor of knowing him. May his memory always be for a blessing 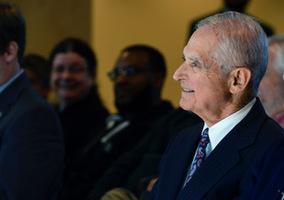