To share your memory on the wall of Gloria Bryan, sign in using one of the following options:

Ann begged her father to allow her to go away to college and after much debate, she departed for the University of Florida in Gainesville in the fall of 1953, becoming the first person in the family to attend college. Ann studied Journalism and dreamed of a career in writing for newspapers. That dream was cut short two year later when Claude Leonard died unexpectedly and Ann gave up her college plans to come home and help Artie Lou raise her siblings.

While back in Jay, Ann married and in 1958 gave birth to daughter, Jennifer Ann Britt. In 1960 daughter Daphne Sellers Britt came along and finally in 1962, daughter Shella Leigh Britt made her appearance. In 1968 Ann divorced and in 1970 married William H. (Bill) Bryan. Bill adored his “Miss Ann” and they were married for 47 years until Bill passed in 2017. Ann loved Bill’s daughters Kay and Tricia and their families as if they were her own.

Ann decided to continue her education in 1967, taking a pre-dawn bus to the University of West Florida to attend classes for her Bachelor of Arts in English, which she completed in 1969. Ann began her teaching career at Milton High School, where she taught English for three years. In 1971, she set out to work towards a master’s degree in English at UWF, which she received in 1972, going on to teach English the next nine years at Allentown High School. Ann loved to teach and instilled the love of reading and writing to all the young students that she taught. Ann could always be found with her nose stuck in a book or newspaper…reading was her passion and especially English Literature.
Always eager for higher education herself, Ann earned an Education Specialist degree in Elementary and Secondary Administration and Supervision from Florida State University. She then worked towards a PhD, completing the course work for a degree in Post-Secondary Administration and Supervision from FSU in 1979. In 1981, she was named Language Arts and Reading Coordinator for Santa Rosa County Schools, where she served until her retirement in 1997.

One of the highlights of Ann’s post retirement life was a trip that she and Bill took to London, England in April 1998. They rented a flat in London and spent three months exploring London and taking trains to other parts of England, especially to see where Bill had served in WWII. Ann loved Shakespeare and was thrilled to go to the Globe Theatre to see his plays enacted. Ann kept a detailed journal of their trip and adventures every day, so that the memory would not fade over time. Those journals were on her bedside table even at the last moments of her life.
Ann was an active and energetic member of the American Association of University Women, serving two-year terms as Vice President, then as President and then as Past President/Advisor for the Pensacola chapter. She cherished her colleagues and fellow educators in the school system, making memories and lifelong friends.

Ann provided a kind, loving, yet strict environment while raising her three daughters. It only took that “raised eyebrow” or a quick pinch in church to squelch any nonsense. Reading was encouraged and expected of the girls from a young age and many trips to libraries and the Book Mobile ensured a never-ending supply of books.

Her grandchildren knew Ann as “Meemaw”. She loved them all dearly and spoiled each as much as she could get away with. A visit from Meemaw or trip to see Meemaw was a much-anticipated event and even though they were scattered from Mississippi to Central Florida, Ann and Bill drove to visit their grandchildren regularly, attending births, birthday parties, school events, Grandparents Days, plays, recitals, sports events and graduations.

After Bill’s death in 2017, Ann moved to the Orlando area to be closer to her daughters. She took interest in many new activities, including painting, crafting, singing, chair aerobics, and participating in many group activities. She was quite the sight on St. Patrick’s Day when she allowed her beautiful silver hair to be highlighted green!

To send flowers to the family or plant a tree in memory of Gloria Ann Leonard Bryan, please visit our Heartfelt Sympathies Store.

There are no events scheduled. You can still show your support by sending flowers directly to the family, or planting a memorial tree in memory of Gloria Ann Leonard Bryan.
Visit the Heartfelt Sympathies Store

We encourage you to share your most beloved memories of Gloria here, so that the family and other loved ones can always see it. You can upload cherished photographs, or share your favorite stories, and can even comment on those shared by others. 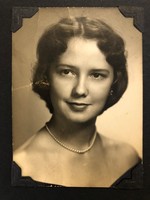