To share your memory on the wall of Glenn McDonald, sign in using one of the following options:

After graduating from college in just three years, Glenn returned to Pensacola and rediscovered his passion for SCUBA diving. He certified me as a diver and we found new adventures under the sea. Soon, Glenn (being the smart man that he was) realized he could make a living doing the things he loved.

He bought a partnership at Skipper’s Diving and built a pool onsite for teaching. Next, he ventured into his own business starting McDonald Marine, an underwater construction company. As the business grew, he created McDonald Contracting. Glenn bought a barge, a crane and a tug boat that he named “Little Mac” and worked throughout Florida, Vermont, South Carolina, St. Croix and St. Thomas, U.S. Virgin Islands.

I remember the night in 1978 when Glenn called and told me he was going to be late because he had to transport the crane to a jobsite in Escambia Bay. It was foggy and he was wondering why he agreed to be on the water that night. When a plane crashed next to his barge, he knew why he was there. That night, my husband and his first mate were able to rescue all but three passengers from National Flight 193. In fact, one of the passengers he pulled onboard his barge was a friend’s mother.

Glenn was honest, humble, smart, fun, funny and a no-malarky kind of guy. He was a crafty problem solver, designed machinery and could do just about anything with his hands. He was an inventor.

I’ve shared some of the wonderful things about my husband, but most importantly to me, he was the love of my life.

Glenn graduated from Pensacola High School in 1954 and then The University of Southern Mississippi where he was an ATO member. He was a member of Downtown Rotary and First Presbyterian Church.

Services are not planned at this time. Donations may be made to the First Presbyterian Church, Pastor’s Discretionary Fund, 33 E Gregory St, Pensacola, FL 32502.

To send flowers to the family or plant a tree in memory of Glenn Edwin McDonald, please visit our Heartfelt Sympathies Store.

There are no events scheduled. You can still show your support by sending flowers directly to the family, or planting a memorial tree in memory of Glenn Edwin McDonald.
Visit the Heartfelt Sympathies Store

We encourage you to share your most beloved memories of Glenn here, so that the family and other loved ones can always see it. You can upload cherished photographs, or share your favorite stories, and can even comment on those shared by others.

3 trees were planted in the memory of Glenn McDonald

Posted Apr 05, 2021 at 12:28am
You will have many memories to savor about Glenn. I photographed him and Bill Kenny for The Guidepost Magazine and interviewed them both for an article I did for the International Rotarian Magazine about that eventful night. My father was on the marine radio talking with Glenn trying to help him get his bearings in the Escambia Bay fog when the plane crashed. He was always home with the sea. I offer my heartfelt condolences to your family, but take comfort in that he now rides freely with the dolphins.

Posted Apr 01, 2021 at 07:15pm
We are so sorry for your loss. We are both sending our love and prayers to you. We will be thinking of you.
Love you Jay & Ann Johnson
Comment Share
Share via:

Posted Mar 30, 2021 at 06:40pm
I just read the story about Mr. McDonald’s passing in the News Journal. Though I’ve known the story of the miracle for 43 years, I never knew the name of the man who pulled my grandparents from the Escambia Bay. Grandma Virginia and Grandpa Paul were flying in from Norfolk, VA to visit my little brother and me. Mr. McDonald saved my grandmother’s life (my grandfather was one of the three). I was never able to thank Mr. McDonald, but to his family... please know, I am forever grateful to him and to you. Glenn McDonald was a hero, not just to the 58 souls aboard that flight, but also to an 8 year old little girl and her 2-year old brother who loved their grandparents dearly. Thank you.
-Krista Wilkes

Posted Mar 27, 2021 at 02:54pm
I remember Mr. McDonald so fondly. He already had 3 girls but he never minded taking me along on as a spare on different adventures. He had a ready smile and was always equipped to make a corny dad joke. He put up with me bouncing on his brand new brown sectional sofa with his own girls singing really loudly to Elton John turned up as high as he would allow. I can't hear anything from "Goodbye Yellow Brick Road" without being transported back to their house on the bay. I know Mrs. McDonald adored him and is really missing him. Widowhood is a lonely club. Perhaps now she will divulge exactly what WLMD means. My thoughts are with you across the miles.
Comment Share
Share via:
JB

Thank you for sharing the memories that mean so much to us. About the WLMD, Mom's not sharing, lol. 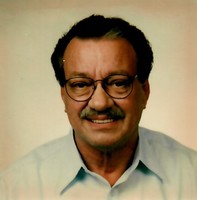