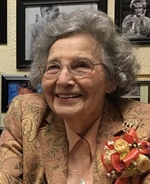 Estlene Patricia Mansur Franklin, “Pat,” was born to Estle T. Mansur and Jo Pauline Bayles Mansur in Tecumseh, Oklahoma at the home of her grandmother on September 22, 1928. The family lived in Muskogee, Oklahoma and later settled in Wewoka, Oklahoma where Pat graduated from Wewoka High School in 1946. After graduation, Pat went to Harding University, Searcy, AK, where she met her future husband, Thomas Walter Franklin.

Pat was the oldest girl among seven children. She learned many domestic skills at an early age, including milking the cow every morning and canning with her grandmother. She enjoyed cooking and preparing meals for her large family and became a culinary expert. She won top awards in home economics in high school and later many ribbons from state fairs and cooking contests. She helped produce and publish a cookbook, “Some Like It South,” with LACE (Ladies Association for Christian Education) organization in Pensacola, FL.

Pat and Tom were married December 7, 1947, after completing two quarters in college. She and Tom moved to Troy, AL. Pat worked as a telephone operator and purchased the first family car. To that point, they drove the "Franklin Furniture” family van. In Troy, Tom and Pat lived in the basement of a home built by Tom and his brother, Clayton. Behind the house was a stocked pond, still known as "Franklin Pond.” In Troy, Tom and Pat had two daughters, Kay Rita and Patti Jo.

In 1955, Franklin Furniture moved to Pensacola, FL. There, Tom and Pat had their only son, Tom, Jr. who lived only a week. Tom joined the Internal Revenue Service. The family made frequent moves within Florida as Tom advanced with the IRS. Pat became an expert at painting, wallpapering, sewing draperies, and making home improvements. Pat put her touch on every family home and happily moved to the next adventure with Tom. One of their adventures led them back to Pensacola where their third daughter, Nancy Lou, was born, February 20, 1958, one of their happiest days.

Pat became an accomplished children’s Bible teacher, teaching classes in at least seven cities, in Wewoka, Troy, and across Florida. She was also a Girl Scout leader. She taught girls how to pitch tents, build fires, and even bake cakes in a fire pit. There was nothing that Pat would not try! She lived her life with a “can do” attitude and a song in her heart. Pat enjoyed singing and had a song for everything! Her girls remember her bursting into song at the most unexpected moments.

Pat was a seamstress. She made a garment a day for many years. She proudly displayed a plaque that read, “She who dies with most fabric wins.” Pat definitely had the most fabric. But it was always put to good use, clothing her children, her extended family members, and those less fortunate than her. In August 1975, she sewed her daughter’s bridal gown with tucks running the full length of the gown and seven bridesmaid’s dresses for a lovely outdoor wedding ceremony.

When Pat found herself in an empty nest and no longer required to take care of parents, she took up painting as a hobby. And, of course, she excelled there too! She used whatever was available to create art from shells, fabric, and paint. Her art is displayed in all her children’s homes.

We will miss Pat's sense of humor. She even asked that we inscribe, “I told you I was sick.” on her tombstone. Pat brought a smile to everyone she met.

Waters & Hibbert Funeral Home is in charge of arrangements.