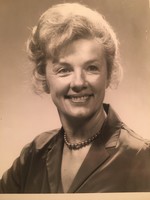 Dorothy, originally from St. Louis, MO, became a resident of Pensacola in 1954 when she and husband, Marion (Buster) Pepper, returned from Emory University Dental School, to set up his practice. She became a member of Pensacola Junior League and Christ Episcopal Church.

After her four children, Kathy, Nancy, Doreen, and Zemp, reached various levelsof education, she developed an interest in her own education and began working in the education system. Simultaneously, she achieved her BA degree from PJC and UWF, then her master’s and her doctorate in Education EdD in Behavioral Sciences. During this time, she and Buster divorced.

She worked to develop the fledgling Drug Addiction and Rehabilitation Program in Pensacola. She joined Civil Service first assigned to San Diego, then back to Pensacola as part of CNET at NAS. She met and married Ret. Capt. FW Scanland. They lived in Pensacola with a summer cabin in Waynesville, NC near the Blue Ridge Parkway. Dorothy lived in Pensacola for several years after Worth's death in 2002, before moving to Ft. Myers, FL to be closer to her children. Doreen Pepper became her anchor and eventually her caretaker.

She passed away December 5, 2020, at a hospital due to complications from COVID19. She at 91, outlived all her siblings and both husbands. She is survived by her four children, Kathryn Pepper Siegel (Bugsy), Nancy Pepper Sandlin (Marc), Doreen Pepper, Zemp Pepper (Anna), four grandchildren, Barton Nielsen, Laura Emory Nielsen, Mercedes Pepper Frick, Kimberli Pepper, and one great grandchild, Bradford Nielsen.

Visitation will be 10:00 a.m. with Funeral Services at 11:00 a.m. Friday, December 18, 2020 at Waters & Hibbert Funeral Home LLC with Father Ken Griffin officiating. There will be a live stream of the funeral service https://www.hdezwebcast.com/show/dorothy-lillian-scanland Burial will follow at Barrancas National Cemetery.

In lieu of flowers, contributions may be made to the local Alzheimer’s Organization or plant a tree in her honor.

WATERS & HIBBERT FUNERAL HOME LLC is in charge of arrangements.