To share your memory on the wall of Commander Donald Lamb, sign in using one of the following options:

He was transferred to Pensacola, Florida in 1975 for his last assignment as the Executive Assistant and Senior Aide to the Chief of Naval Education and Training, Naval Air Station, Pensacola. This assignment was unusual since he was the only Commander in the Navy assigned to a Vice Admiral (three star) in this capacity.
Commander Lamb's awards include: The Meritorious Service Medal with Gold Star, Navy Commendation Medal, Navy Good Conduct Medal with three bronze stars, and other campaign service medals.
Commander Lamb was preceded in death in 1994 by his first wife of 43 years, Sue Jackson Lamb of Macon, Georgia. He is survived by his loving wife Sarah Burge Lamb and numerous children and grandchildren. His sons are Michael Lamb and his wife Nancy of Chesapeake, VA, and Stephen Lamb and his wife Barbara of San Antonio, TX.

A family service will be held September 30, 2020 at Waters and Hibbert Funeral Home Chapel. Burial will follow at Barrancas National Cemetery. A "Live Stream" of the Services for Commander Donald Lamb will be at 8:50 a.m. to 9:40 a.m.

To send flowers to the family or plant a tree in memory of Commander Donald Keith Lamb, please visit our Heartfelt Sympathies Store.

We encourage you to share your most beloved memories of Commander Donald here, so that the family and other loved ones can always see it. You can upload cherished photographs, or share your favorite stories, and can even comment on those shared by others.

Garen and Catherine Blythe and MIke and Nancy Lamb sent flowers to the family of Commander Donald Keith Lamb.
Show you care by sending flowers

Posted Sep 27, 2020 at 01:43pm
Wishing you peace to bring comfort, courage to face the days ahead and loving memories to forever hold in your hearts. Rodger & Kathy Krull

3 trees were planted in the memory of Commander Donald Lamb

Posted Oct 03, 2020 at 07:50pm
With heartfelt condolences, we send you thoughts of peace and courage.

Posted Sep 28, 2020 at 01:56pm
Please accept our most heartfelt sympathies for your loss... Our thoughts are with you and your family during this difficult time. 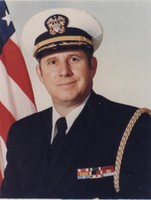