To share your memory on the wall of Ann Schops, sign in using one of the following options:

Print
In the early morning hours of January 19th, 2021, Ann Gundersheimer Schops slipped away from this life peacefully in her sleep at the age of 98.

Our family has lost a beloved matriarch. Pensacola has lost a remarkable link to its past, a... Read More
In the early morning hours of January 19th, 2021, Ann Gundersheimer Schops slipped away from this life peacefully in her sleep at the age of 98.

Our family has lost a beloved matriarch. Pensacola has lost a remarkable link to its past, a memory so keen and so vivid that her face would light up at the recollection of a face, a name, an event or a place. In particular, Ann was the guardian of our family’s institutional memory and its link to the history of Judaism in northwest Florida and in the Southern US.

Ann tragically lost her father, David Gundersheimer, in the fall of 1929 when she was barely 7 years old. In the wake of such great loss, she grew more reliant upon the love of her mother, Belle, and older sister, Janice, to traverse and survive the adversities of the Great Depression. Both she and her sister spent long periods with distant relatives while their mother did all she could to keep the family afloat and moving forward.

While her sister married a Pensacola man and settled to raise a family of 8 children, Ann met a young Army corporal from New York named Hal. They were wed and spent a whirlwind honeymoon together shortly before he was called to action in France. Ann’s return to Pensacola on the train to wait out the war became fodder for one of her epic stories, one of fear and sadness, joy and hope. Ultimately, she and Hal were reunited. He became a newspaperman in New York City while she kept house, cared for their extended family, nurtured a love of family history and developed her renowned cooking talents at their home on Long Island. “New York” became synonymous with Ann and Hal’s life together.

Ann and Hal were childless, yet to their beloved nieces and nephews, they were much more than parents. They were the stuff of fantasy and celebrity: they dressed elegantly, entertained lavishly, lived largely and loved greatly. In later life, when they retired to Pensacola, Ann and Hal became more accessible and evolved into loving “grandparents emeritus”, hosting family gatherings where Ann’s cemetery chicken or matzo ball soup drew justifiable raves. Meals with Ann and Hal were memorable.

No visit with Ann and Hal, later just Ann, was complete without a visit to “our history”. Ann possessed encyclopedic knowledge of what made us us. While history can be as dry and taste-free as an overdone Thanksgiving turkey, in the hands of a gourmet like Ann Gundersheimer Schops it was vivid and real, important and relevant, a 5-star Cordon Bleu tour de force.

Throughout their lives together, Ann and Hal were avid golfers. In their retirement, they lived on a golf course and played as often as they could. Ann was a particularly skilled, award-winning player.
Ann was a dedicated bridge player who could regularly be found at the Pensacola Bridge Center on 12th Ave. She played the hand published in the newspaper every day.

On the subject of newspapers, Ann was a devoted fan of the NEW YORK TIMES. She consumed the Sunday TIMES with relish and enjoyed nothing more than exchanging views on the topics of the day with friends and family. Whomever she engaged had best be prepared to defend his/her position! Ann always was, thoughtfully and compassionately, but with vigor and with command of the facts.

Temple Beth El in Pensacola was Ann’s spiritual home. She was confirmed there and was a lifelong member. In the tumult of life, she was grounded by her faith, a key component in her ravenous appetite for history, and by her abiding love of the country that provided her safety and security, nourishment and a chance for growth, opportunity like no other. Ann was an American patriot in the truest, quietest sense of the word.

Ann knew the meaning of gratitude. She took nothing for granted, not the return of her beloved Hal from war, not the chance phone call of a longtime friend, not the meal that would sustain her further down her path, not the gee-whiz technology that allowed her one more visit with those dear to her who otherwise would have never had the chance to say “Good-bye”.

Ann Gundersheimer Schops was born at Sacred Heart Hospital (12th Ave) in Pensacola, Florida on April 17, 1922. She passed from this life at Wesleyhaven Villa on January 19, 2021. Ann was preceded in death by her husband of 63 years Hal Schops, father David Gundersheimer, mother Belle Berlin Gundersheimer, sister Janice Gundersheimer Sanchez Brewton and nephews Lars David Sanchez (Cammy) and Gary Jorisch (Sylvia). She is survived by nieces and nephews, Dale Sanchez Miller (Allen), Jack Sanchez (Kay), Ernest Sanchez (Janie), Jan Sanchez (Brenda), Belle Sanchez Welk (John), Sandra Sanchez Hill (Greg), Philip Sanchez (Tony) and Audrey Mard (Rob), cousin and lifelong physician, Dr. Billy Zimmern (Beverly), 20 great nieces and nephews, 7 great-great nieces and nephews and 4 great-great-great nieces and nephews. Ann’s extended family, spread across every corner of the nation, were very dear to her and many were pointedly helpful in her genealogical reasearch. She is also survived by a community of friends whom she thought of as family.

A small graveside service will be held with WATERS & HIBBERT FUNERAL HOME directing.

In lieu of flowers, please consider a donation to the Rabbi’s Fund at Temple Beth El in Ann’s memory.

To send flowers to the family or plant a tree in memory of Ann Gundersheimer Schops, please visit our Heartfelt Sympathies Store.

We encourage you to share your most beloved memories of Ann here, so that the family and other loved ones can always see it. You can upload cherished photographs, or share your favorite stories, and can even comment on those shared by others. 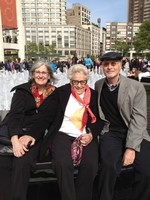